Doha: Jassim Talfat, Executive Director of Sports Facilities at the Supreme Committee for Delivery and Legacy, confirmed that nearly 90% of the facilities and infrastructure required to host the historic World Cup have been completed, and said: “Now our main concern is the preparations for the World Cup operations, and these procedures and preparations resulted in the announcement of the schedule of the Championship matches last July in cooperation with FIFA.

He said that FIFA is the strategic partner in the preparations for the hosting of the World Cup in Qatar 2022, pointing out that through the visit of the President of (FIFA), he attended the meeting of the Board of Directors of the Supreme Committee for Delivery and Legacy, headed by His Highness Sheikh Tamim bin Hamad Al Thani Emir of the country, and listened to the latest achievements and developments that have taken place during the past period, during the visit he made an inspection tour on Al-Bayt Stadium of the World Cup, this architectural edifice of the World Cup, which is an architectural symbol of the World Cup on the gate of the city of Al-Khor.

Jassim Talfat spoke to Al-Hasad program through Al-Kaas sports channels about the Corona pandemic and its impact on the preparations for the championship saying: We were relentless in proceeding with the completion of the required projects and preventive precautions were put in place alongside a plan of action remotely, and mechanisms were put in place to ensure the progress of work to commit to delivering on time, and last July marked the inauguration of the Stadium of The Educational City, which is the third stadium of the championship and the digital inauguration and announcement of the readiness of this stadium to host the next liabilities, where it has already hosted the QNB Stars League, and the Asian Champions League, as well as Qatar will host the AFC Champions League for the Eastern Region next month.

He added: “The focus is now on the operation of these stadiums and conducting multiple tests and the involvement of the human staff in the multiple tests before the start of the big tournament, and today we approached the inauguration of Al-Bayt stadium and approached al-Rayyan Stadium also, and next year Al-Thumama and Ras Abo Abbod and Lusail will be completed, a year before the World Cup all stadiums will be ready for the championship, an achievement that no one has ever done before. He pointed out that the statement of Infantino, the president of FIFA was a kind of surprise, joy and happiness for what he saw on the ground, which confirms the excellence of Qatar to host the best version in the history of the World Cup, and Qatar will also be the best representative of the Middle East and the Arab world in this tournament, especially since today on the ground the stadium of Al-Bayt is ready more than two years before hosting this event.

Support for more than 30,000 workers in World Cup projects

Mohammed Fahad al-Hajri, Senior Director of Compliance and Audit in the Department of Workers’ Welfare of the Supreme Committee, expressed his pride in receiving the Award for Excellence in Occupational Safety from the Ministry of Municipality and Environment at a ceremony held by the Ministry on the occasion of the launch of the Book of Qatari Achievements in Occupational Safety 2020, which confirms the achievements of the Supreme Committee for Delivery and Legacy and its commitment to safety standards in projects.

He stressed that the honoring comes as a culmination of the committee’s efforts over the past years in terms of the welfare of workers and in terms of workers safety and well-being, whether in the workplace or accommodation, and the launch of the book, which contains a range of achievements for Qatari companies working in this field and a reference for other companies working in the field of establishments, and can be a reference not only for Qatar but also for the region and the world, because it contains many practices and achievements.

He added: The standards have been applied from 2014 and are constantly evolving in accordance with the requirements of international standards and one of the safety standards was the comprehensive medical examinations of all workers and electronic medical records, and the regulation of thermal stress, and one of the important points is the achievements of mental health in light of the(Covid-19) pandemic, especially that all workers had concerns and they are away from their country and their commitment to work and the achievement of the committee in dealing with mental health has a great role in cooperation with Hamad Medical Corporation and the Ministry of Public Health, and we have partners Also with the Building and Timber Organization to participate in on-site inspection it is a kind of transparency and proof to the world that our doors are open to all, and also we have an independent external inspector to monitor and inspect companies randomly to ensure the application of safety standards through commitment to ethical employment, work environment and workplaces.

He stressed that the Supreme Committee is on a line with the State’s vision with regard to human and social development and the extent to which it is promoted as a social basis and has a humanitarian impact as a host country for the World Cup, and to strengthen these basics and apply them on the ground, where the Department of Workers’ Welfare was established, which in turn confirms the commitment to apply these standards and support more than 30,000 workers working on the Committee’ projectss in terms of safety and welfare of workers, as well as an important point to provide a modern and fair working environment that reflects on the state in particular and the region in general.

Al-Bayt is an integrated sports city

Dr. Nasser Al Hajri, Director of Al-Bayt Stadium in the Supreme Committee for Delivery and Legacy, confirmed that the stadium has become a landmark in Qatar and in the world certainly through its distinctive design that reflects the heritage of the region and the country, and therefore it was the best stadium that can inaugurate the World Cup in the presence of officials and fans from all over the world, as well as the capacity of the stadium is 60 thousand spectators, in addition to its presence in an area easily accessible through 3 main roads, the coastal road, Al-Shamal Road and Al-Majd Road, as high ways that connect the stadium with speed and satisfaction.

Al-Hajri pointed out that Al-Bayt Stadium is the second largest stadium in Qatar and features a garden and a large green area up to more than 350 thousand meters of green areas, trees, lakes, places for children’s games, an outdoor gym, and 6 modern restaurants that have been established through the reuse of materials and recycling, and there are also 10 cafes.

He concluded: “We are very proud of Al-Bayt Stadium and the fact that we are responsible for the construction of the stadium, which is an irreplaceable opportunity for someone who participates in this outstanding project that reflects its legacy in its design and details, and the president of (FIFA) praised the stadium and showed his amazement of the level, design and fine details, in addition to the presence of a 5 star hotel in the stadium that will be used as a sustainability project after the global event as well as a cinema and a branch of Aspetar Hospital and a large hall of bowling and a mall and many spaces and thus a sports city integrated offering something special to the fans. 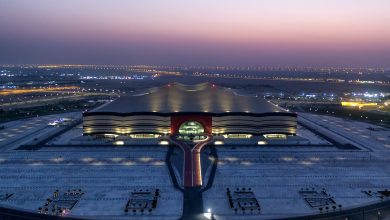 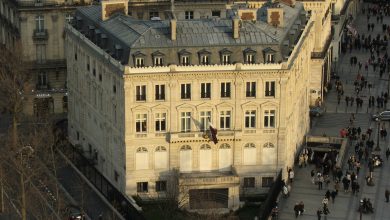 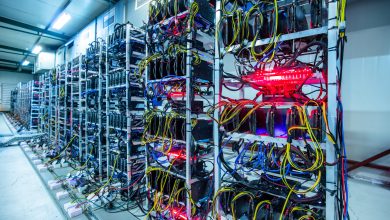 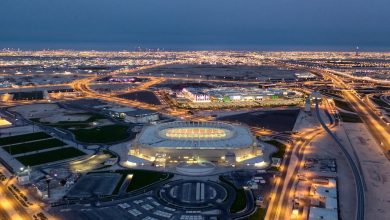