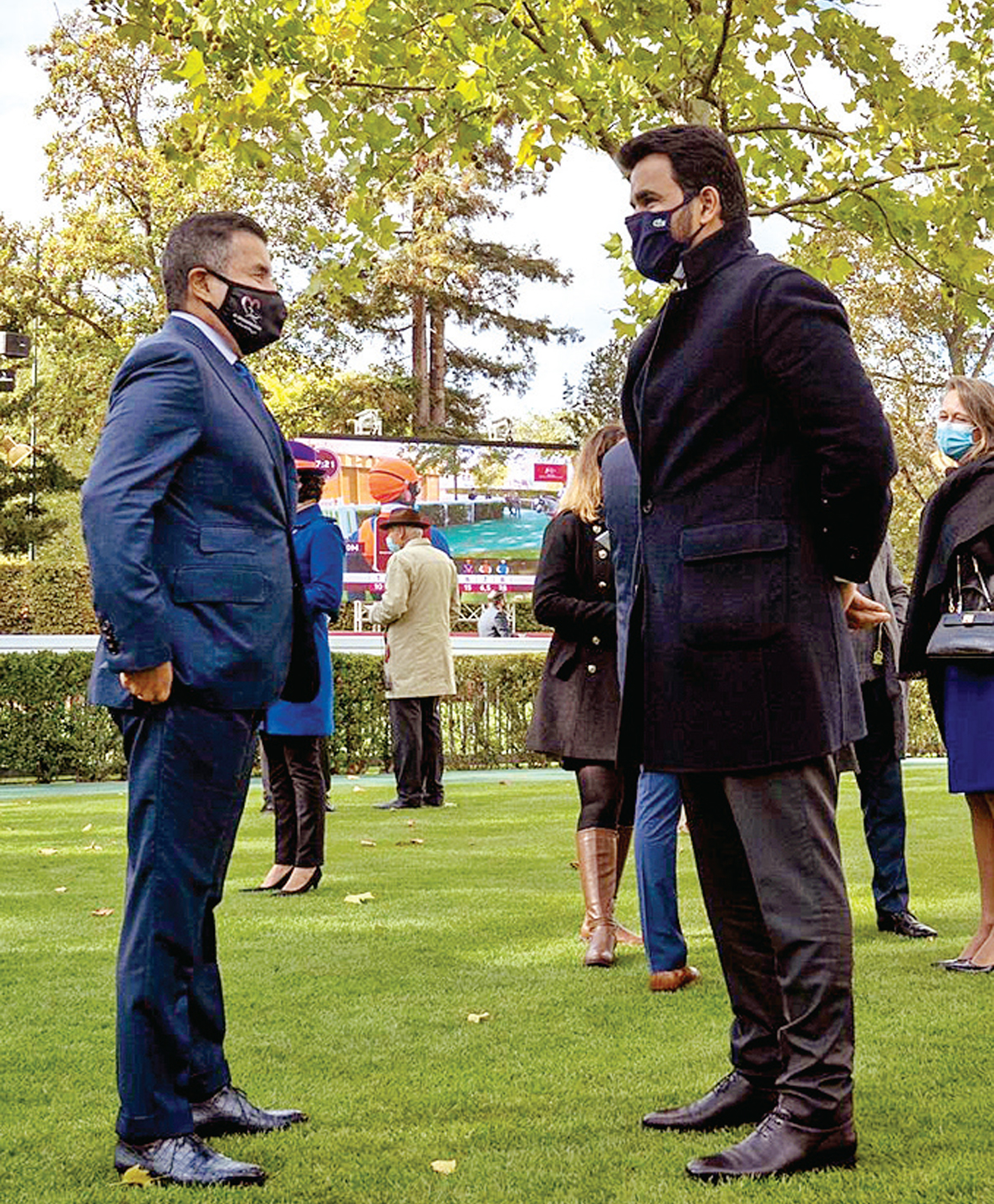 Doha: In the presence of His Highness Sheikh Mohammed bin Khalifa Al Thani and His Excellency Sheikh Joaan bin Hamad Al Thani, President of the Qatar Olympic Committee, the curtain was drawn yesterday evening on the events of the Qatar Prix De l’Arc De Triomphe, which is sponsored by Qatar through cooperation between the Racing and Equestrian Club and France Galop, the body responsible for horse racing in France, and the last day races were held at the Paris Loncho Racecourse in the French capital amid new procedures for the race due to the current conditions in the world due to the outbreak of the new Coronavirus (Covid-19).

The racecourse witnessed many strong and exciting runs among some of the best race horses in the world, and His Excellency Sheikh Joaan bin Hamad Al Thani, President of the Qatar Olympic Committee, crowned the winners of the Qatar Prix de l’Arc de Triomphe Award for the first category of Thoroughbred purebred horses aged 3 years and above for the distance of 2400 m, this is one of the most important runs in France and Europe in general, and is held annually within the events of the Arc de Triomphe.

«Sotsas» (Scioni x Starlets Sister) was awarded the Qatar Arc de Triomphe award in the first category of the Thoroughbred purebred horses aged 3 years and above for the distance of 2400 m which is considered the best race in the world owned by White Birch Farm, by a neck difference with the trainer Jean-Claude Roger and horseman Christian Demoro at Paris Loncho racecourse, and this victory is a big surprise especially as the expectations were to “HANNIBAL” winner of the title twice before, which only secured the sixth place in the race.

The coronation ceremony was attended by His Excellency Sheikh Joaan bin Hamad Al Thani and Officials of France Galop in accordance with the protocol followed in the coronation after the end of the exciting run, and the joy of the winners was great, especially as it is the most important race in this great global event. 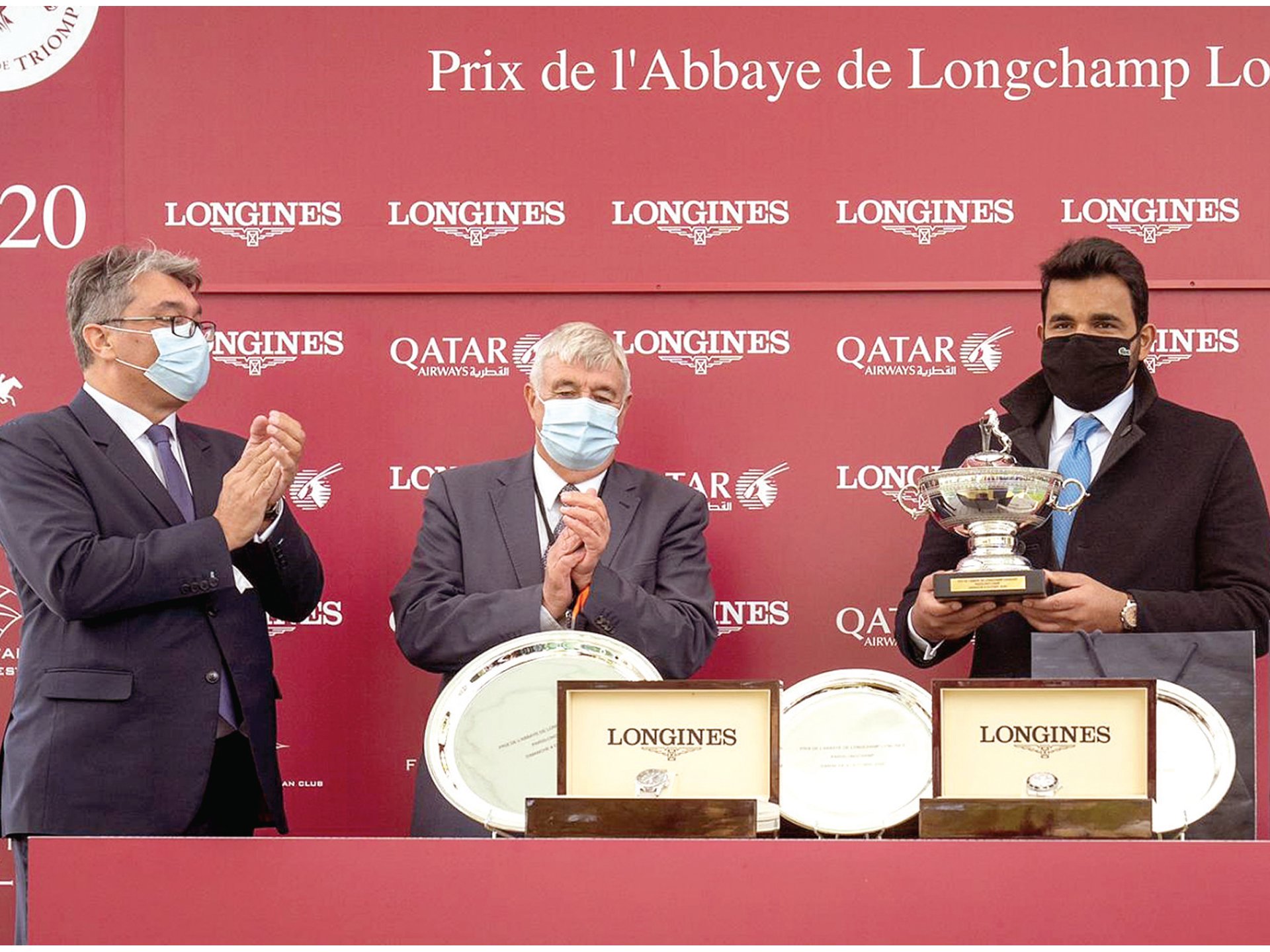 An achievement for «TAIF»

The last day saw a new Qatari achievement, which was represented by the acquisition of «TAIF» (Amer ×Jamila) owned and bred by His Highness Sheikh Abdullah bin Khalifa Al Thani champion of the Qatar World Cup of Arabian Thoroughbreds in the first category aged 4 years and above for the distance of 2000 m with a short head difference with coach Thomas Forsy and horseman Olivier Pelier at Paris Loncho racecourse.

The eight-year-old “TAIF” (Amer) owned by His Highness Sheikh Abdullah bin Khalifa Al Thani is one of the most experienced participants in this year’s edition of the Qatar World Cup of Arabian Thoroughbreds, although he did not succeed in his previous participation in this great world race, and this time it was his fifth participation in the race, which is the World Championship of Arabian Arabian Thoroughbreds, he managed to achieve victory under the leadership of horseman Olivier Pelier and under the supervision of coach Toma Forsy, who won all the great runs of Arabian Arabian Thoroughbreds held at this year’s Qatar Arc de Triomphe.

TAIF gave a very distinguished performance where he remained in the middle position throughout the early stages of the run, and then swooped with a very huge dash in the straight track, to catch up with «MESSI» (Dahis) who was occupying the front and entered with him in a very strong competition to the extent that the final outcome of the race was delayed to the final moments, however, TAIF was able to end things in his favor to excel and win the title and cup by a short head, while “IBRAZ” (Amer), who was a candidate to win as he participated as the title holder, came third and was unable to keep up with “TAIF” this time. 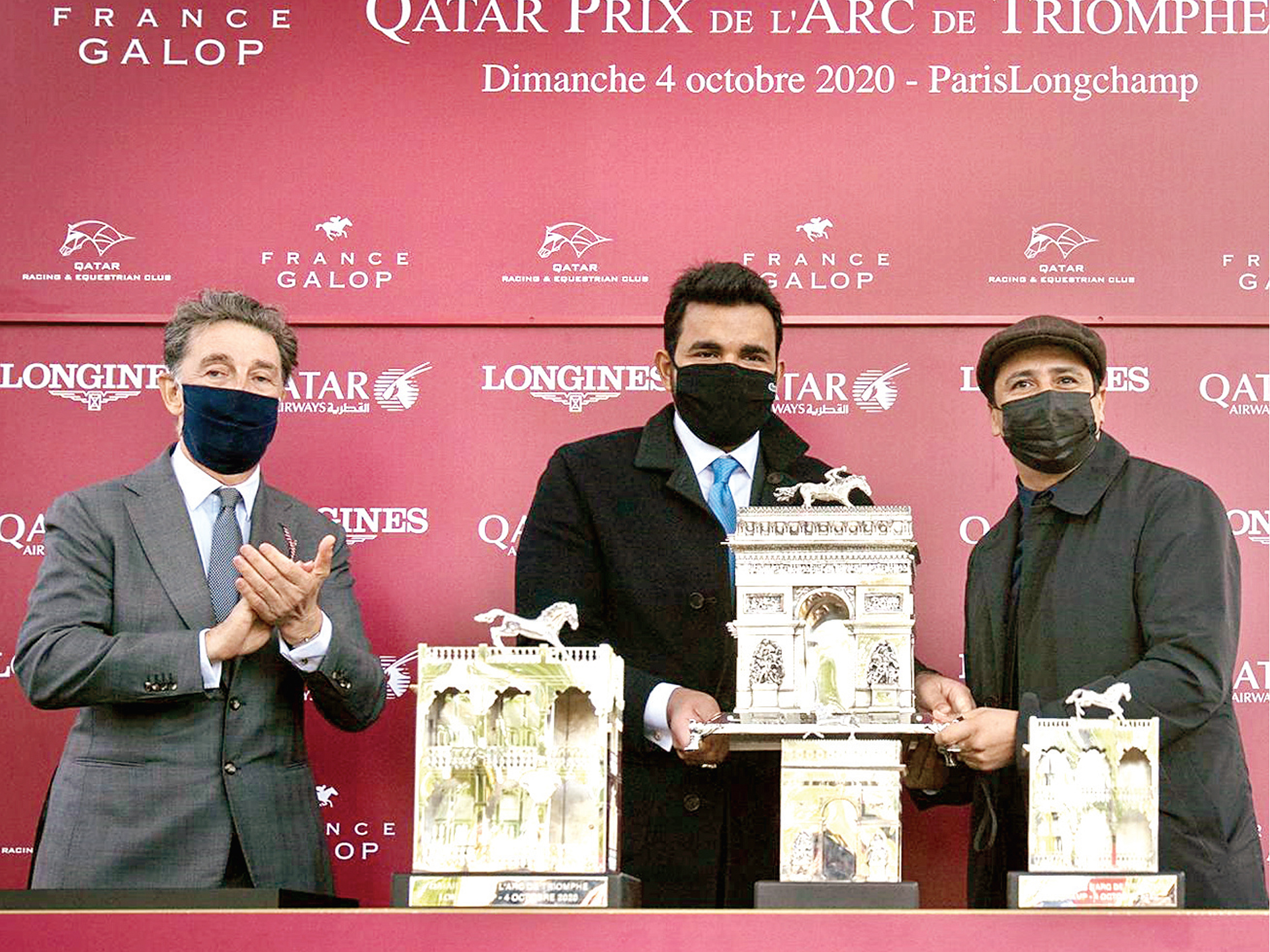 This victory for «TAIF» reflects the Qatari excellence and pioneering in this type of racing, as evidenced by the fact that most of the titles were the share of Qatari horses, especially the horses of the farm of Um Qarn, and the al-Shahaniya farm, which has won the title more than once in recent years.

TAIF’s victory was not easy with the strength of the participating horses and the great rivalry between them throughout the race distance, and also the eyes were on “IBRAZ” to see what he will do again on the Paris Loncho racecourse and his ability to win the great challenge, but “IBRAZ” was content with the third place. 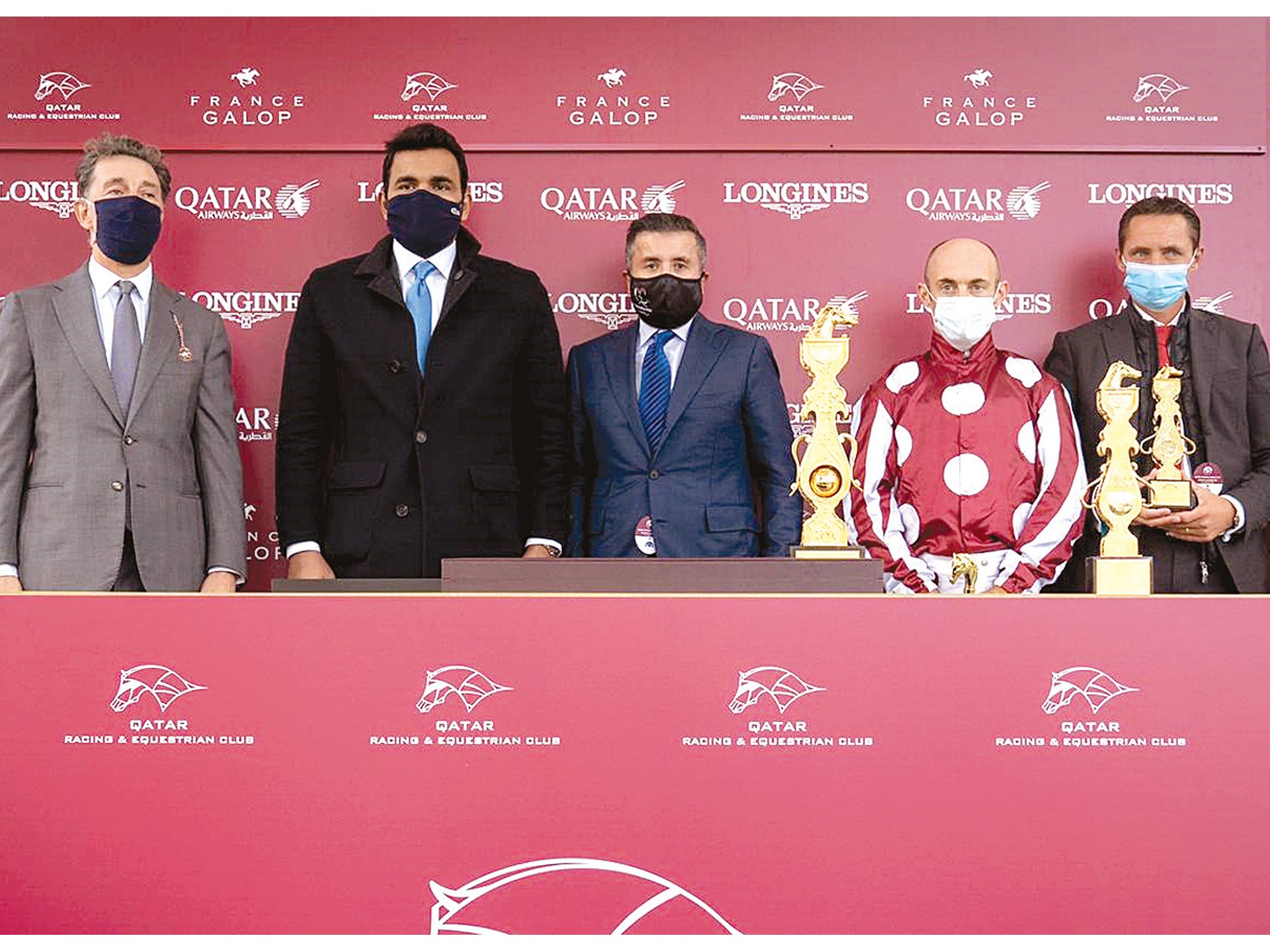 The joy was great, especially since after the victory of «TAIF» Qatari streak continued in this year’s version of the world event, through the victory achieved by the red filly «WOODED» (Wooten Bast x Farida Laplund) owned by al-Shaqab Racing in labi Loncho Longinin from The first category for Thoroughbred purebred horses aged two years and above for the distance of 1000 m with a neck difference with the trainer Francis Honore Grafar and horseman Pierre Charles Boudood, to continue the Qatari victories where the second day of the race witnessed the wonderful victory of the skilled filly “Lady Princes” owned by Shuail bin Khalifa al-Kuwari, winning the Qatar Arabian Filly Award, 4 years old in the 2000m at Paris Loncho Racecourse, reaffirms Qatar’s absolute leadership in Thoroughbred Arabian horse racing on the European and international stage.

The end of the festival was special

Nasser Sherida Al Kaabi, CEO of The Racing and Equestrian Club, congratulated His Highness Sheikh Abdullah bin Khalifa Al Thani, owner of “TAIF”, for winning the Qatar World Cup of Arabian Thoroughbred Horses in the first category, as well as to His Excellency Sheikh Joaan bin Hamad Al Thani on the victory of “WOODED” in one of the first class runs for Thoroughbred purebred horses aged two years old.

Al Kaabi said after the race: “The conclusion was remarkable and reflects Qatar’s keenness to continue sponsoring this great world race despite the current circumstances in the world due to the Corona pandemic, and the fact that the presence of both. His Highness Sheikh Mohammed bin Khalifa Al Thani and His Excellency Sheikh Joaan bin Hamad Al Thani, President of the Qatar Olympic Committee for the final day, is our biggest support in Qatari equestrian, and this presence coincided with winning the Qatar World Cup for Arabian Purebred Horses so the World Cup remains in Qatar again amid a great dominance of Qatari horses on the Arab grand prix around the world,

The victory of “WOODED” owned by al-Shaqab Racing in a race of the first class and on this world track reflects the interest of Shaqab Racing and its success in being among the list of crowns in this great race. Al Kaabi added: “With the 2020 edition of the Qatar Arc de Triomphe race brought to a full conclusion, we are preparing to start the local season in Qatar on October 14th, and we hope to continue to work in the way that achieves the desired goal of developing horse racing and that Qatar will remain in the position it deserves in this field. 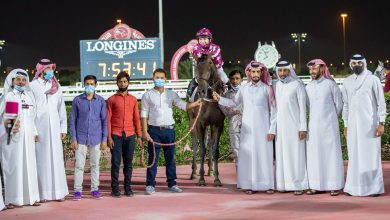 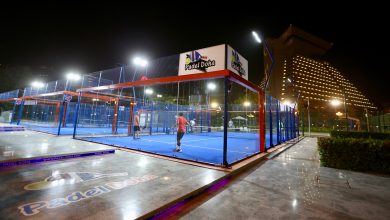