The study by retired virologists for the US army and FDA indicates that people may be safer outside when temperatures soar.

In fact, they suggest staying indoors may be more harmful, due to the fact the bug survives longer inside.

Peak sunshine happens in the UK around the solstice on June 21, and at this time of year 30 minutes of direct sunlight is enough to reduce the bug’s effectiveness by 90 per cent, the study found.

This means that if someone who was infected coughed on an outdoor surface, the virus would dissipate relatively quickly.

Come mid-September it could take an hour and 17 minutes for the virus to die on surfaces outdoors and nearly three hours in March, the scientists found.

During winter the virus could survive for more than five hours in the weak sunlight, although indoors it is likely to last for days.

This varies depending on how cold the city you’re living in is – the further North you go the longer it takes for the virus to die off because the sun is weaker up there.

The same applies globally – the closer you are to the poles the less corona-killing power the sun has.

The study’s authors, Dr Jose-Luis Sagripanti and Dr David Lytle, are even arguing that lockdown measures could actually have harmed people and increased the spread of coronavirus.

“Forcing people to remain indoors may have increased or assured contagion of Covid-19 among same household dwellers and among patients and personnel inside the same hospital or geriatric facilities,” they wrote in the journal Photochemistry and Photobiology.

“In contrast, healthy people outdoors receiving sunlight could have been exposed to a lower viral dose with more chances for mounting an efficient immune response.

“The viral persistence estimated here for cities at northern latitudes where Covid-19 expanded rapidly during winter 2019-2020 and relatively higher viral inactivation in more southern latitudes receiving high solar radiation during the same period, suggests an environmental role for sunlight in the Covid-19 pandemic.”

Ultraviolet radiation (UV) in sunlight kills viruses by damaging the bug’s DNA. Viruses tend to survive better in cold weather because they have a fatty protective coating which degrades when it is warm.

While the melting of the coating allows the virus to invade the warmth of the body, it dies if the casing disintegrates outside.

Thursday is set to be the hottest day of the year so far at 34C in some places.

Temperatures are set to soar this week
There have been multiple studies that have confirmed the link between sunlight, high temperatures outdoors and coronavirus.

A new study from the US National Biodefense Analysis and Countermeasures Center also found that coronavirus floating in the air decays by 90 per cent in just six minutes of summer sunshine and 19 minutes of winter sunlight.

One study by Harvard University showed that flu survived on a surface for more than 23 hours at 6C in dry weather, but at 32C the samples died within an hour.

During the Spanish Flu pandemic of 1918, doctors noticed that patients who were nursed outdoors appeared to recover better and were four times more likely to recover.

The University of Oxford also recently conducted a review into whether climate conditions were playing a role in the transmission of coronavirus, also found that cold and dry conditions appear to boost the spread. 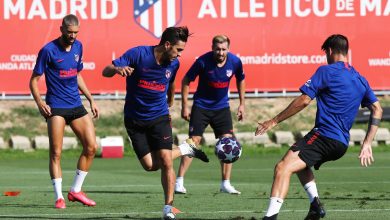