Doha: Qatar National Library held a lecture entitled (Writing the Holy Quran through the ages), which reviewed the history of writing of the Holy Quran and the development of its writing and production over different times, as part of the activities of Doha, Capital of Culture in the Islamic World 2021, and to celebrate the blessed month of Ramadan.

The first axis of the event was presented by the Engineer Ibrahim Youssef Al Fakhro, a Qatari researcher interested in manuscripts and Qurans, especially the fonts used in writing the Holy Quran, he also issued a book and (a catalog) illustrated on the topic entitled (The Journey of Arabic Calligraphy in the Shadows of the Holy Quran ).

In his speech, Al Fakhro relied on displaying aesthetic models from his private collection of Quran manuscripts that he owns in Doha, and many of his collections have also been displayed in specialized exhibitions.

While the second axis presented by the Library’s manuscript specialist, Mahmoud Zaki, dealt with the general traditions of writing and producing Qurans, and what is related to manuscript science studies of paper, ink, etc. This was done through an applied study of a group of rare and precious Qurans in the collection of rare manuscripts in the Qatar National Library, a group belonging to different parts of the Islamic world and its eras, from the Arabian Peninsula to Africa, and from China to Andalusia.

In this context, the Head of Collection Access at Qatar National Library Maryam Al Mutawa, stated that the partnership between QNL and the Ministry of Culture and Sports reflects QNL’s commitment to the importance of educating and transferring knowledge about Islamic culture and traditions, adding that in celebration of Doha, the capital of culture in the Islamic world, we have planned a series of educational events that shed light on several topics, including the history of codification of the Holy Quran, the presentation of scientific applications to preserve the Islamic documentary heritage, the role of public and private libraries in preserving the Islamic heritage, and the efforts of the founder of the State of Qatar in printing and publishing religious books.

Throughout history, Muslims have devoted a great deal of care and attention to the service of their holy book. 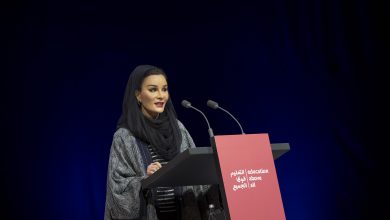