Doha: Al Sadd beat Al Rayyan 2-1 in the high-profile Qatar Clasico in Week 21 of the 2020-21 season QNB Stars League at the Al Sadd Stadium on Tuesday.

Striker Baghdad Bounedjah and Midfielder Santi Cazarola scored for Al Sadd from a penalty kick in the 4th and 66th minutes, while Ivorian Yohan Poli scored Al Rayyan’s only goal in the 28th minute.

With this result, Al-Sadd continued its series of victories without defeat, to raise its tally to 57 points, which it was at the top, while Al-Rayyan stuck at 34 points, remaining in the third rank.

The match began strong and exciting, and the two teams exchanged attempts to reach the goal until the fourth minute in which Al-Sadd carried out a typical counterattack that ended with a goal through Baghdad Bounedjah, who received a pass in the rear and left the defenders from his colleague Hashem Ali, who had no difficulty sending the ball in the net.

Al-Rayyan, after this goal, pressed to even the score wasting many opportunities, most notably in the ninth minute from , Yohan Poli, who’s ball was removed by goalkeeper Barsham to a corner kick, and the same player returned to waste another opportunity in the 27th minute while he was completely alone in the goal.

Yohan Poli returned again and replaced the two missed chances, and after a corner kick in the 28th minute by Abdel Aziz Hatem, Polly succeeded in putting it into the net with a powerful header to the left of the goalkeeper Barshim.

Before the first half ended, Hassan al-Haydous scored a goal, which was canceled after the use of video-assisted technology (VAR).

The second half began with attempts by the two teams also, and the most prominent of them was two shots by the players of Al-Sadd Cazorla and Baghdad Bounedjah, which did not succeed, and in the 66th minute, Santi Cazorla managed to score the second goal from a penalty kick.

Al-Rayyan, for their part, sought to score, but all the attempts of his players were stopped by the defense of Al-Sadd and behind them goalkeeper Barsham, until the referee announced the end of the match with the victory of Al-Sadd. 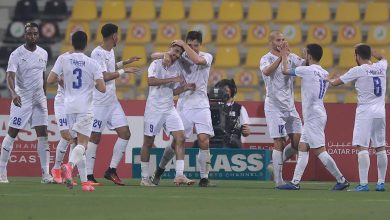 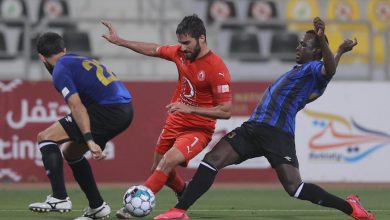