Youcef Belaili chose to drive the penalty to the right of Umm Salal keeper Samy Habib deep into stoppage time (90+11) as Qatar SC picked up three points after a feisty contest.

Qatar SC now have a tally of 27 points, while Umm Salal stood on 15 points.

Qatar SC started in an aggressive fashion when in the sixth minute Anthony Okpotu fired a shot at the Umm Salal goal from the edge of the box, but the ball was blocked by Roozbeh Mohammed.

Three minutes later, feared striker Belaili fired one from an acute angle, but his shot was blocked by Umm Salal’s Ahmed Hammoudan.

Rabeh Yahia of Umm Salal managed a spectacular solo effort in the 23rd minute, but his powerful shot sailed above the Qatar SC crossbar.

In the 25th minute, Elmehdi Barrahma connected with a corner kick, but his deflection from close range narrowly sailed above the Umm Salal crossbar. Ten minutes later, Elmehdi attempted another shot at the goal, but his powerful shot was blocked by Moses Orkuma.

Nine minutes into the second half, Qatar SC produced one more threatening move through Belaili who curled in a spectacular shot from the edge of the box, but the shot was blocked by Umm Salal keeper.

A couple of minutes on, Adel Alawi, also of Umm Salal, attempted a similar long-range effort, but he was wayward with his right-footed drive.

Elmehdi continued with the trend of attempting long-range shots in the 69th minute but this time also, the Qatar SC forward was slightly wayward. Three minutes later, Aymen Abdennour brought down Okpotu with a fierce tackle and got thrown out of the game with a red card.

In the 88th minute, Bashar Resan got a chance to tap the ball into the net from a few metres, but his deflection flew up above the Umm Salal crossbar.

In the dying seconds of injury time, Omar Al Emadi flicked one from close range following a goalmouth melee, but Umm Salal’s Ibrahim Elsadig headed the ball to safety.

But there was further drama in the match when Roozbeh elbowed Qatar SC’s Mohammed Salem as both players jumped to connect a loopy cross inside the Umm Salal box. Referee Yousef Al Sharshani used VAR to award a penalty to Qatar SC and Belaili easily converted it. 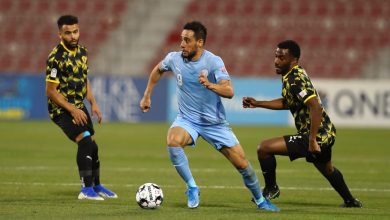 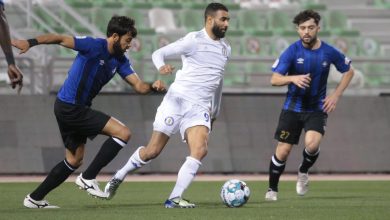 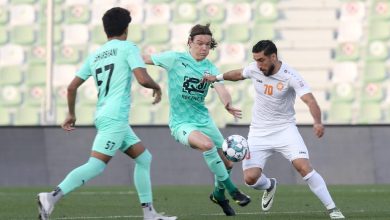