London: Britain has detected a new variant of the coronavirus in contacts of cases who have travelled from South Africa, Health Secretary Matt Hancock said on Wednesday.

South Africa’s health department said last week that a new genetic mutation of the virus had been found and might be responsible for a recent surge in infections there.

“Thanks to the impressive genomic capability of the South Africans, we’ve detected two cases of another new variant of coronavirus here in the UK,” Hancock told a media briefing.

“Both are contacts of cases who have travelled from South Africa over the past few weeks.”

Britain is already battling to curb the spread of a mutated strain of the virus which is up to 70% more transmissible, and

Hancock said the new variant appeared to have mutated further and was more infectious.

He said close contacts of those with the new variant were being quarantined and all those who had been in South Africa in the last fortnight also needed to quarantine.

He also said immediate restrictions was being imposed on travel from South Africa.

In addition to the travel restrictions, Hancock said the government was also asking anyone who has been in close contact with someone who had been in South Africa in the last two weeks to quarantine.

“They must restrict all contact with any other person whatsoever,” he said.

The discovery of cases of what officials believe is a new, more transmissible variant of the coronavirus in the UK follows the announcement last week that a new strain had spread throughout the south of England.

More than 50 nations also imposed their own travel restrictions on the UK, including France.

A ban on cross-Channel freight to Europe has wrought havoc around the key port of Dover and led to fears of food shortages in the country’s supermarkets because of paralysis in supply chains.

Hancock on Wednesday announced the expansion of strict lockdown measures across further parts of the south of England to contain the spread of the disease.

With more than 68,000 deaths from the virus, the United Kingdom is one of the hardest hit countries in Europe.

140 People Referred to Public Prosecution for Not Wearing Masks 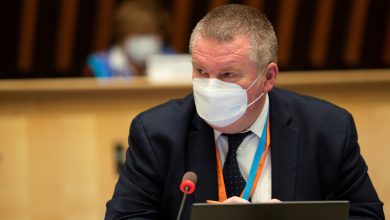 WHO: Coronavirus deaths will exceed 100,000 a week