Al Wakra Souq Intersection is a major link where it is located at the southern entrance of Al Wakra to connect the traffic coming from Mesaieed Road and the southern part of the Doha Expressway in the direction of Al Wakra Road to facilitate access to west Al Wakra.
The new intersection will facilitate access to many vital facilities such as Al Wakra Family Beach, Al Wakra Old Souq, Government Service Complex, as well as a large number of residential and commercial compounds along Al Wakra Road. Also, it will enhance traffic to Al Janoub Stadium for being so close to the southern part of the Doha Express Highway leading to the World Cup Stadium. 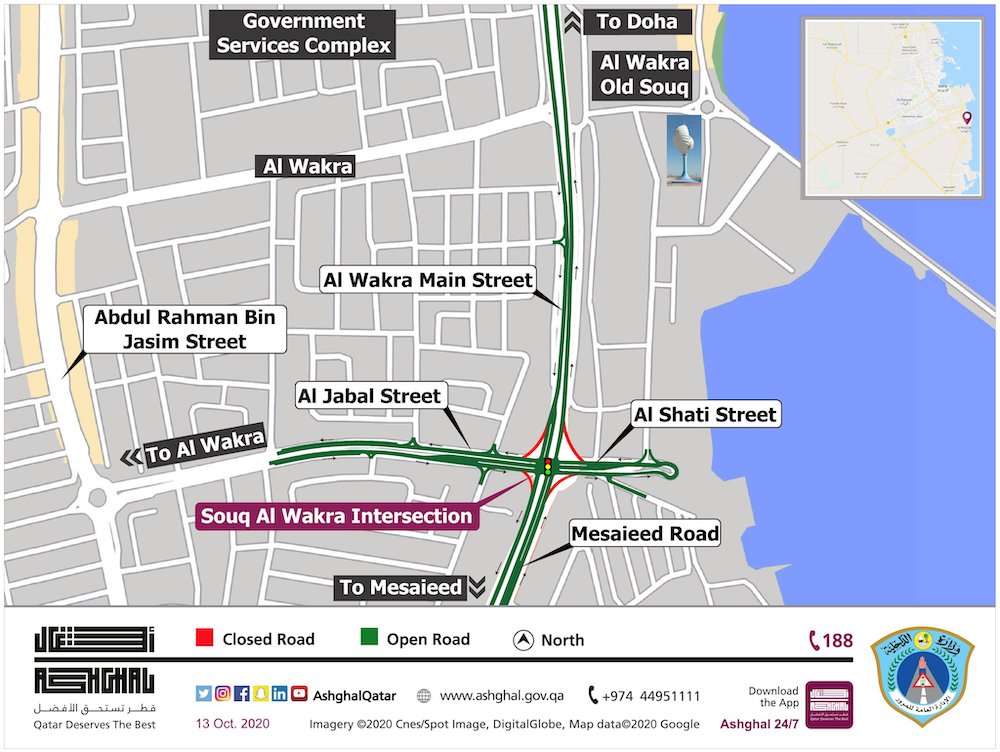 The Intersection is also an extension to Al Wakra Main Road connected to Al Wakra station, where Al Wakra Road integrates with the Redline of Qatar Rail on its median, to tie Al Wakra and Doha through the two major stations of Al Wakra and Ras Bu Fontas.
By the end of 2020, the Public Works Authority will complete the conversion of the Pearl Roundabout to signalized intersections, additionally; two new signalized intersections will be constructed in Al Wakra Road, Al Razi Street and Al Wukair Road.

On this occasion, Engineer Saleh Al Sheeba, from Highway Projects Department at Ashghal confirmed that 73% of Al Wakra Main Road Upgrade Project has been completed which upon completion will improve traffic between Doha, Al Wakra and the southern areas.

Al Sheeba explained that the old roundabout has been converted into a signalized intersection to connect AlWakra and Mesaieed, which will distribute traffic movement in all directions coming and leading to Al Wakra, Mesaieed and Al Wukair.

Al Sheebah explained that the old roundabout has been converted into a signalized intersection to connect Al Wakra and Mesaieed, which will distribute traffic movement in all directions coming and leading to Al Wakra, Mesaieed and Al Wukair.

Ashghal has completed the implementation of many parts of Upgrade Al Wakra main road project, where the intersection between Al Wakra Road and Ras Bu Fontas Street was recently opened partially to traffic, which is located on Al Wakra Tunnel.  The openings are integrated with Al Wakra Metro Station, one of Qatar Rail’s main stations.

The opening of the intersection and Al Wakra Tunnel improved traffic between Doha and Al Wakra and provided a free traffic flow for road users from Ras Bu Fontas station towards Pearl Roundabout.

Ashghal also moved the iconic Pearl structure to Al-Wakra Souq and reinstalled it near Al Farda Roundabout, within Ashghal’s strategy to develop and construct infrastructures while preserving the country’s cultural heritage within the purview of Qatar National Vision 2030. This was also to ease completion of work of at Pearl Intersection, transforming it from a roundabout to signalized intersection.

It is worth noting that the iconic pearl monument has a great symbolism for the residents of Al-Wakra who were known for fishing and pearls, and the monument was built and installed on Al-Wakra Road in the late eighties to take inspiration from the history of this calm coastal town.

Reinstallation of the pear monument required a precise mechanism for lifting and installation, which was done through a metal base for lifting and fixing it on the concrete pillar, to ensure no distortion to the structure that weighed about 12 tons.

Ashghal’s directions in this work met with the desire of people in Al Wakra to restore the pearl as an iconic landmark, realizing several goals, most important of which is to highlight the coastal city’s nature, its distinct heritage and its societal and historical characteristics.

The Public Works Authority ‘Ashghal’ has started work on converting the Pearl Roundabout to a signalized intersection after opening of Al-Wakra Tunnel and parts of the project along the 3.5 km from Ras Bu Fontas station to Barwa village.

Ashghal is working on completing the works of Al Wakra road development project. The construction works include extension of 5.5 km road from the Pearl Intersection up to the petrol station towards Mesaieed road, including transferring three main roundabouts, namely Pearl Roundabout, Ooredoo Roundabout, and Al Ajfah Roundabout (known as Al Jabal Roundabout) to signalized intersections, in addition to construction of two new intersections near Al-Razi Street and Al-Wukair Road.

Al Wakra Road serves several residential neighborhoods and commercial points in Al Wakra and Al Wukair areas and it is considered one of the important projects in the southern region. This project will ease direct traffic flow from Al Wakra towards Doha in the north and to Mesaieed towards south.

Al Wakra main road development is a continuation of the highway network projects in Qatar. It will have a significant impact on traffic in the southern region, as travel time will be reduced by 60% on Al Wakra Road. Also, its integration with other major roads of the recently opened highway network such G Ring Road, Mesaieed Road and the southern part of Doha Expressway (Al Wakra Bypass Road), which is connected with Al Janoub Stadium, one of the venues hosting the FIFA World Cup 2022 in Qatar. 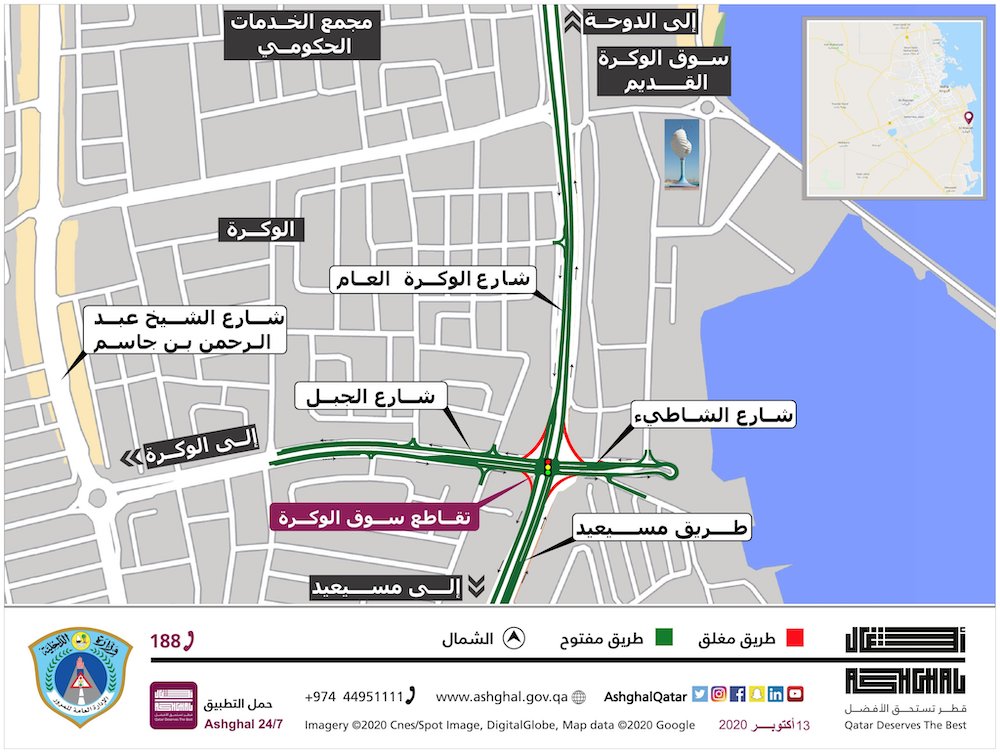 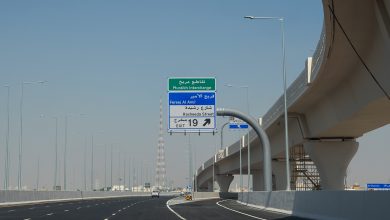 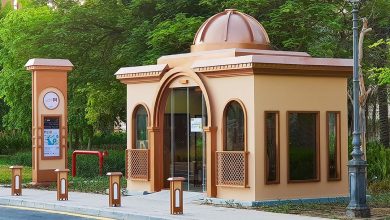 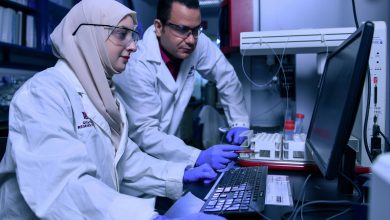 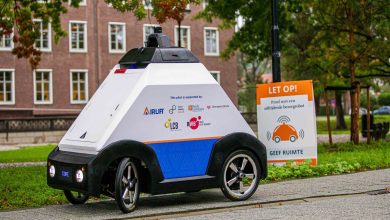