The MoU signed by Kahramaa president engineer Essa bin Hilal Al Kuwari and CEO of Qatari Diar Abdullah bin Hamad Al Attiyah is in line with Qatar National Vision 2030, which places economic, social, and environmental development as a joint goal. It also suits Lusail city’s vision of sustainability. The MoU also comes in the framework of Kahramaa’s electric vehicles policy, in cooperation with the Ministry of Transport and Communications. There are currently 11 charging stations, with plans for 30 more this year including the 10 new stations for Lusail.

Commenting on the occasion, HE Minister of Transport and Communications said that the MoU is part of the ministry’s strategy of establishing an electric vehicle charging stations network. His Excellency noted that next year will see the operation of 100 chargers. His Excellency these stations will be placed in strategic areas like Hamad International Airport, Hamad Port, Grand Hamad Street, among many other areas. His Excellency also said that today’s announcement will add value to Lusail city, reflecting its goal of being a sustainable smart city.

His Excellency discussed the ministry’s recently-announced electric vehicles strategy will help develop an infrastructure for EV public transport that will be the first of its kind in the region. His Excellency noted that as part of the strategy, the ministry is working with Mowasalat Co. (Karwa) on a plan to replace the entire fleet to EVs in the coming years.

For his part, President of Qatar General Electricity & Water Corporation (Kahramaa) Eng. Issa bin Hilal Al Kuwari, said that the corporation seeks to provide a healthy and safe environment for future generations, in line with the Qatar National Vision 2030 by promoting sustainability and reducing harmful carbon emissions. He indicated that one of the most important ways to achieve this is to promote electric vehicles and install the necessary infrastructure for it in coordination with the Ministry of Transport and Communications and the relevant authorities in the country, and this is followed by the State of Qatars intention to present an environmentally friendly and carbon-neutral FIFA World Cup .

He explained that this agreement between (KAHRAMAA) and Qatari Diar comes to complement this approach in Lusail, which is an example to be followed in the field of sustainable cities, especially since the MoU is a model for consolidating all efforts enhance sustainability.

Engineer Al Kuwari praised the Qatari Diar Companys initiative to install 10 charging stations for electric vehicles and to seek the assistance of Karamaa’s efforts represented by the national program “Tarsheed”, which provides the necessary technical support and supervises the implementation of the project from the stage of decline to operation and follow-up.

The CEO of Qatari Diar. Eng. Abdullah bin Hamad Al Attiyah stressed that the signing of the memorandum of understanding comes as a continuation of cooperation between the company and Kahramaa, and other government institutions.

He stressed that Lusail City puts in its strategic vision the achievement of sustainability principles, preserving the environment and relying on alternative energy sources to reduce the generation of carbon dioxide and control emissions within the city, in addition to the GSAS standards that are already being used in the city.

Al Attiyah said that the participation of Qatari Diar in the initiative to provide a more sustainable energy source for transportation within the State of Qatar by providing fast charging stations for electric cars inside Lusail to encourage the spread of electric cars more.

Especially since the State of Qatar has already started supporting the manufacture and supply of electric cars, and in line with the strategy of the Ministry of Transport and Communications of the electric buses project in the country, which aims to convert 25 percent of the public transport bus fleet into electric buses by 2022 and the use of electric buses in the main services during FIFA World Cup 2022, to be the first tournament to use electric mass transit buses.

During the signing, Chief Development and Asset Management Officer at Qatari Diar Yousef Al Musleh, provided a detailed explanation of the mechanism of these stations and their locations. Qatar General Electricity and Water Corporation (Kahramaa) will carry out all Infrastructure works for shipping terminals, installation of their own equipment, provide advice, and the necessary technical and technical support during the process of preparing, installing and examining the aforementioned charging stations. On the other hand, Qatari Diar purchases supplies, installs and tests 10 charging stations for electric cars in Lusail.

Qatari Diar and (Kahramaa) have identified the installation sites of all stations in the city’s high density public areas such as the Marina Walk, Marina Parking and Crescent Park. The highest technical standards are adopted in the specifications of the express charging stations for vehicles. Where vehicles can be charged up to 80 percent in just 30 minutes with a capacity of 50 kilowatts, which is in line with applicable international electrical safety standards, in contribution to improving emissions control within Lusail City while reducing the generation of carbon dioxide and saving on transportation expenses, Al Musleh said.

Qatari Diar is committed to all that advances the sustainability goals of Lusail City which consider to be the largest sustainable city in the country. The company seeks to encourage alternative sources of energy for transportation and mobility in the city, hence the starting point for establishing these stations and expressing a desire to cooperate with (Kahramaa) to provide support in this regard.

Qatari Diar Real Estate Company was established in 2005 by the Qatar Investment Authority, the sovereign wealth fund of the State of Qatar. The companys flagship project, Lusail City, was launched in December 2005, The progressive self-contained city is the largest single development to be undertaken in the State of Qatar

Qatari Diar has a shared capital of $8 billion, With 50 investment projects under development held in 22 countries around the world, combining an investment value of around $35 billion, and has established itself as one of the worlds most trusted and respected real estate companies because of its commitment to quality, local community, partnership, and sustainability. 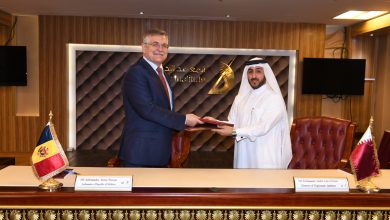