Doha: The Ministry of Transport and Communications (MOTC) stated that the initial operation of Hamad Port’s Container Terminal 2 (CT2) is set to begin in December, for container handling.

CT2 development consists of 4 phases. Full operation of Phases 1 & 2 will start before the end of 2022, taking the port’s capacity to 3 million TEUs per year. Phases 3 & 4 will be developed later to raise the port’s operational capacity according to local market’s needs.

On this occasion, HE Minister of Transport and Communications Jassim bin Saif Al Sulaiti said: “Announcing the initial operation of CT2 is a new achievement to be added to Hamad Port’s series of previous achievements, thus boosting its huge potential, advanced utilities and modern systems for increasing Qatar’s trade with the world, in addition to improving the country’s competitiveness by transforming it into a regional business hub with sustainable development for the coming generations.”

The fact that CT2 works near completion confirms the continuity of plans that aim to develop and increase the port’s capacity, which is progress in full gear with no delay or slowdown despite the repercussions associated with the Coronavirus COVID-19 pandemic, which affected several economies around the world directly and indirectly, HE the Minister said.

“During developing CT2 and its associated building and construction works, MOTC’s vision has been implemented, which aims at supporting the local manufacturing and deploying latest technologies that are based on environmental sustainability and clean energy,” he said, noting that all materials used in the works of infrastructure, preparations and construction at CT2 are made in Qatar with universal specifications, as well as the structures of the electric trailers that transport containers within the terminal / port, thus supporting the electric vehicles strategy and legislations that aim to back the country’s agenda for greener future.

Minister Al-Sulaiti said that MOTC, by backing this kind of business, is significantly contributing to reinforcing the localization of manufacturing, expertise and global technologies, in addition to its plans for localizing the actual operational processes for several transportation and communication projects, thus enriching local companies’ investment ideology to achieve the Qatar National Vision 2030.

QTerminals, which manages and operates Phase 1 of Hamad Port, has completed 2 million man-hours without LTI during the development works of CT2. QTerminals is set to offer the shipping sector all the modern equipment that uses latest and eco-friendly world technologies to execute their business fast and smoothly.

Phase 1 of CT2 has been equipped with 3 STS quay cranes with advanced technology, including semi-automation and remote-control operations. STS cranes are known for being so fast and extremely efficient in container handling and capable of handling latest types of vessels. Each crane can handle four 20′ containers or two 40′ containers at the same time. Four more cranes will be added during 2021, taking the total number of cranes to seven.

CT2 has been also equipped with 12 RTGs and 14 more will be added during 2021, taking the total to 26. RTGs are used for handling containers on the landside. RTGs are of battery hybrid type. This technology reduces the environmental impact of RTG operations by reducing fuel consumption. Further, when a container/load is lowered, there is a spike of generated power which results in a rapid charge event of the batteries.

CT2 has 22 Terminal Tractor APM 75T HE for container transportation within the terminal and the port. This type of terminal tractors is capable of functioning very efficiently in high temperatures. It’s equipped with advanced batteries, an entirely solid-state technology insensitive to temperature variations from -20 to 160 C. This supports its operations at Hamad Port in summers, when temperatures are very high in Qatar.

Terminal Tractors APM 75T HE have high productivity and less maintenance cost. These are also easy to drive with a high level of safety, eco-friendly and energy saver. Being fully-electric makes them clean and sustainable with no polluting or carbon emissions or noise. Their CO2 emissions equal zero ton annually. They have also low operational cost. Each tractor will save nearly QR45,500 a year versus the diesel-powered tractors. One kilowatt per hour costs QR0.32 in electric tractors compared to QR2.32 in diesel-powered ones. CT2 has also four empty container handlers (ECH) and 24 trailers.

Furthermore, CT2’s operation-related and service buildings and infrastructure have been finalized, including the Diesel Generator House (DGH), Main Intake Substation (MIS), Admin Building (ADM), Reefer Stack Gantries (RSG), quayside amenities (QAS), telecom, ELV & SSD networks and stormwater networks, in addition to other relevant infrastructure and establishments. All gates will be automatic with seamless connection to operation systems, electronic data exchange and systems of other bodies concerned, in addition to integration with CT1, which started operation in December 2016. 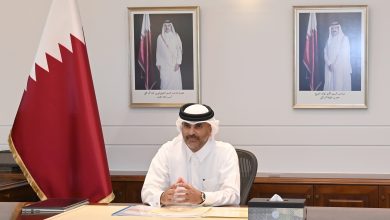