An injury time equaliser from Birkir Bjarnason helped Al Arabi to share points with Al Wakrah in a 2-2 draw in yesterday’s QNB Stars League Round 9 match at the Al Arabi Stadium.

In the other match, Al Ahli picked up full points in a 1-0 win over Umm Salal. Abel Mathias scored the winning goal in the eighth minute.

Playing at home, Al Arabi came from behind twice to pick a point from the four-gal thriller.

Mohammed Salah El Neel (68th minute) and Bjarnason (90+6) were on the scoresheet for Al Arabi, with Al Wakrah having scored through Mohammed Waad Al Bayati in the 40th minute and Mohamed Benyettou (90th-minute penalty).

Of the two sides, it was Al Arabi who had the best of the play. However, they were unable to break the deadlock. They had multiple chances, firstly a cross which evaded everybody in the penalty area and hit the post, before a Bjarnason free-kick was saved, and El Neel’s far-post header did not trouble the keeper too much.

Al Wakrah started to counter and their presence in the opposition half became more incisive as the game grew. They were rewarded for their efforts when Al Bayati received the ball near the halfway line, advanced forward and, lacking other options, launched a fantastic left-footed drive from distance that flew past Gregory Gomis in goal and into the far corner of the goal.

They came close to a second before the half was out when Benyettou struck another shot from distance but, this time, it went the wrong side of the post.

The second half started much like the first as Al Wakrah did their best to protect an important lead. Their defensive discipline finally came undone when Pierre-Michelle Lasogga’s through ball found its way to El Neel, who outmuscled Ali Karami on the edge of the area before sliding the ball past goalkeeper Saoud Al Khater to level the scores.

At this point, Al Arabi were very much in the ascendency and nearly grabbed the lead when Hamdi Harbaoui turned on the volley, but could not keep his shot down.

Al Wakrah seemed to have sealed the points when Hossam Kamal upended Ismail Mahmoud in the penalty area and Benyettou stepped up to fire home the penalty on the stroke of 90 minutes.

There was still time for drama though as six minutes into injury time, former Aston Villa player Bjarnason reacted quickest to Yousef’s corner to smash home an equaliser from close range and earn his side a well-deserved point.

Earlier, in the other match, Umm Salal, playing their first match under Tunisian Ahmed Labiadh who replaced Spaniard Raul Caneda, crashed to their sixth defeat.

After Umm Salal’s Mahmoud Al Mawas missed a sitter by sending his shot wide of the side-netting, Abel put The Brigadiers ahead by heading in a cross by Abdelrahman Mohammed from the right.

Al Mawas impressed with his good runs along the left, and he combined with fellow striker and captain Yannick Sagbo. They were ably supported by Victor Vazquez from the middle.

At the other end, captain Nabil El Zhar linked up well with Hernan Perez.

Sagbo shot narrowly wide in the 21st minute after being set up by Vazquez off a counter-attack.

If Al Ahli dominated the first half, Umm Salal attacked more in the second. The Orange Fortress seemed to be throwing everything into the game in their bid to get their campaign away from the danger zone.

Left-back Murad Naji’s one of many advance movements saw him take a first-time shot off an Al Mawas cross in the 48th minute, only to be blocked by Al Ahli custodian Ivanildo Rodriguez. Murad attempted the rebound, but Ivanildo had recovered to collect it.

Al Ahli, with their fourth victory, moved to 13 points, while Umm Salal’s woes compounded as they stood on five points. 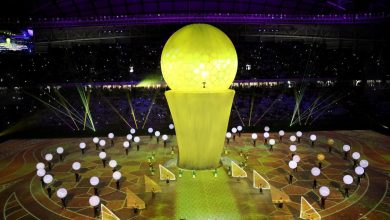 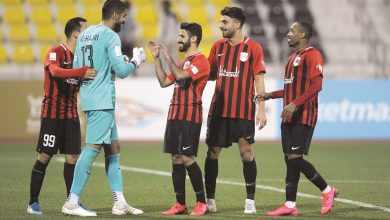 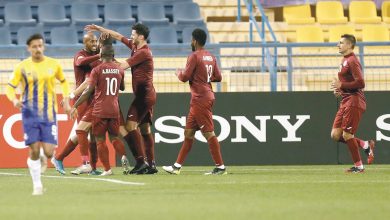 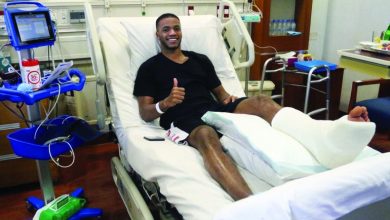