Geneva: The activities of a 5-day “Human Rights and Football” exhibition, organized by the National Human Rights Committee (NHRC), have started yesteray, in cooperation with the Permanent Mission of the State of Qatar to the United Nations in Geneva, on the sidelines of the 49th session of the Human Rights Council.

The opening of the exhibition at the headquarters of the Human Rights Council was attended by a group of representatives of diplomatic missions, ambassadors, representatives of international organizations and countries participating in the current session of the Council. The exhibition includes paintings portrays concepts of human rights in football, as well as models of the World Cup stadiums for the FIFA World Cup Qatar 2022.

HE Secretary-General of the National Human Rights Committee Sultan bin Hassan Al Jamali stressed, in a statement, that choosing Qatar to host the 2022 World Cup was a good occasion to consider the process of integrating human rights concepts into major sporting events, noting that the idea of the “Human Rights and Football” exhibition came in this context, for which the paintings were drawn by the Qatari artist Ahmed Al Maadheed.

Al Jamali added that this exhibition wasn’t just paintings and aesthetic dimensions, but rather standards for the preservation and protection of human rights, with regard to sport, which have been translated into paintings that address humanity in its various languages and cultures, stressing at the same time that the National Human Rights Committee was looking into Sport as comprehensive goals regardless of gain or loss.

He added that they paid a lot of attention to make sport one of the basics for promoting human development and safety, in line with the third goal of the sustainable development goals, which is to ensure that everyone enjoys healthy lifestyles and safety at all ages.

The Secretary-General of the National Human Rights Committee indicated that sport shares many basic goals and values with human rights principles, pointing out that the Olympic Charter aims to make sport a means for the harmonious development of humankind in order to create a peaceful society concerned with preserving human dignity.

He indicated that the United Nations Office on Sport for Development and Peace stressed that well-organized sports activities that shows the best sports values in discipline, mutual respect, sportsmanship and teamwork, can all contribute to the integration of societal groups and help educate individuals about the values necessary for social peace.

Al Jamali also stressed the ability of sport to promote social development by changing perceptions of people with disabilities and providing them with the opportunity to participate in sport and integrate them into their societies. Many of the basic principles contained in international human rights conventions and covenants. He noted that the exhibition boards also express the opposition to violence in stadiums, racial discrimination and racist expressions that may be issued by some fans against the players.

Al Jamali also stressed the ability of sport to promote social development by changing perceptions about people with disabilities and providing them with the opportunity to participate in sport and integrate them into their societies. He said that in this context, the National Human Rights Committee organized this exhibition, which includes paintings that reflect the meanings of human rights in football, and embody many of the basic principles contained in international human rights conventions and covenants, noting that the exhibition’s paintings portray also the opposition to violence in stadiums, racial discrimination and racist expressions that may be uttered by some fans against the players.

For her part, Acting Charge d’Affaires at the Permanent Mission of the State of Qatar to the United Nations in Geneva Jowhara bint Abdulazziz Al Suwaidi stressed the close relationship between football and human rights, noting that the exhibition’s paintings present key messages about the basic principles of human rights in terms of their association with football and promotion of sports values such as respect for diversity and tolerance.

She expressed, in a press statement, her hope that these messages related to the interrelationships between football and human rights would spread as widely as possible, adding: “While we celebrate the countdown to the opening of the FIFA World Cup Qatar 2022, our enthusiasm and anticipation increase to witness this special event that will be hosted by the Arab region for the first time. We are fully confident that history will witness one of the best tournaments ever and will provide moments that the participants will not forget.”

Meanwhile, Special Advisor to Deputy Director General for Field Operations and Partnerships, International Labor Organization, Giovanni Di Cola, noted that the State of Qatar has made great progress with regard to labor reforms, ruling out that football was the one that was able to push forward these reforms.

He stressed that the State of Qatar has made efforts to ensure that labor legislation is in line with international conventions, pointing out that they must congratulate it on dealing particularly in a decisive way at all times.

He said that all the time in Doha, there was work with labor organizations and the government to make sure that Labor issues are dealt with as they arise, stressing that what is happening in Qatar in terms of reforms is not happening in many countries.

With regard to the FIFA World Cup Qatar 2022, Di Cola said that the commitment of the Qatari government to social justice will remain, pointing out that this is not something that will end with the end of the World Cup, but it will continue beyond that, expressing thanks to the government of Qatar for these efforts.

For his part, HE Chief of the Asia Pacific, Middle East and North Africa Branch of the United Nations High Commissioner for Human Rights, Francesco Motta, said that major tournaments such as the World Cup are not just celebrations, but bring prestige to the countries that host them, as well as bring with them a kind of scrutiny, especially in issues related to human rights.

He noted that the government of the State of Qatar has set a positive example in this regard, and has worked to improve workers’ rights through stronger legislation and strengthening cooperation with the International Labor Organization, which has led to respect for the rights of all workers in Qatar.

Motta added that they are sure that the State of Qatar will welcome the whole world in this important event, as from a human rights perspective, the tournament should be held in a safe manner that supports and promotes human rights. 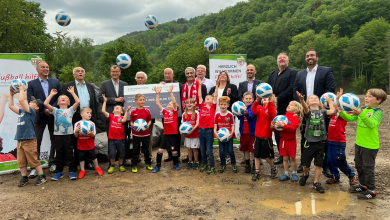