Doha: HE Minister of Transport Jassim bin Saif Al Sulaiti inaugurated Al Sudan Bus Station, which is equipped with electric charging equipment, in a step that supports the strategy of switching to electric vehicles that the Ministry developed in cooperation with bodies concerned.

HE Minister of Transport Jassim bin Saif Al Sulaiti said that inaugurating the first out of eight public transit bus stations comes in the context of the Public Bus Infrastructure Program that aims at creating an integrated and sustainable public transit network to cover all urban areas through a coherent transportation that includes public transit buses, the Doha Metro and the Lusail Tram that will open soon.

Five more public transit bus stations will be inaugurated before this year’s end at Lusail, Gharrafa, the Education City, Al Wakra and the Industrial Area, the minister said.

Two more stations; the Central West Bay and Msheireb, will be inaugurated in 2022 and all those facilities are equipped with electric public bus charging infrastructure, he added.

Inaugurating Al Sudan Bus Station today and the next ones later is especially significant as the FIFA World Cup Qatar 2022 nears, since the public transit network is a cornerstone for the success of that global event through providing a multimodal transportation system to give visitors an exceptional, safer, and smoother experience, the minister said.

The Public Bus Infrastructure Program is one of the world’s most ecofriendly programs, “laying the groundwork for a full switch to a transportation system that is powered by clean, ecofriendly electric energy, thus backing the country’s sustainable development requirements.”

HE Minister Al Sulaiti said that Ministry of Transport is working on measuring improving the air quality in all public transit means and facilities within the framework of Qatar’s National Environment and Climate Change Strategy, thus bringing us one step closer to achieving the Qatar National Vision 2030 goals.”

HE President of Ashghal Dr. Eng. Saad bin Ahmad Al Muhannadi confirmed that the Authority has handed over to the Ministry of Transport five bus stations out of eight stations, which are Al Sudan, the Industrial Zone, Al Wakra, Education City, and Lusail stations, as part of the state’s plan to develop the infrastructure of the transport sector to facilitate and regulate the movement of transport in the state and encouraging the use of public buses.

HE Al Muhannadi explained that Ashghal is working in full swing to complete the public bus infrastructure program in 2022, adding that work is underway to complete the remaining three bus stations, in addition to four other bus depots, and 2,700 bus stops on all main roads, which allow thousands of passengers to use buses in many areas, while providing air-conditioned waiting cabins to protect from sunlight and humidity.

As part of the country’s strategy to switch to clean energy within the Qatar National Vision 2030, Ashghal has installed 653 chargers and 713 electrical transformers in 41 electric charging locations to serve the fleet of electric buses that will operate according to the plan of the Ministry of Transport, he added.

Ministry of Transport’s Technical Affairs Department Director Sheikh Mohamed bin Khalid Al-Thani said that the massive public transit program in Qatar, which has begun to pay off, is giving the country a ranking alongside the countries that are most advanced in terms of public transit systems and transportation services offered to citizens, residents and visitors while deploying latest associated technologies such as payment methods and tracking systems.

Al Sudan Bus Station is strategically located near the Sudan Metro Station and Al-Sadd SC southwards. The western side of the station is neighboring the Aspire Zone, the Villaggio Mall and the Torch Tower and other nearby destinations, he added. Built in an area of 65,216 sq. m., the station accommodates 7 bus bays that can operate 22 buses per hour, distributed on 4 routes with a total capacity of 1750 passengers per day, to reach 7 destinations, particularly the metro stations and bus stations located within a close range, Sheikh Al-Thani noted.

The station building features an iconic curved canopy that spans above it, contributing to the brand identity associated with bus stations. The canopy evokes the ripples of sand dunes with the cladding on the underside of the canopy featuring linear baguette elements evoking the beautiful craftsmanship of traditional hand-made Qatari objects such as woven baskets. Public bus stations include ticketing outlets, offices for the operating company employees, a passenger waiting area and other visitor service facilities. 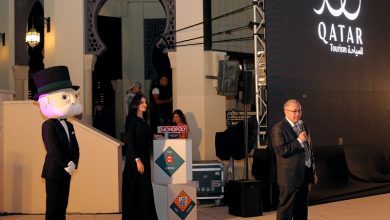